Symbiotic immunomodulators such as the human hookworm – Necator americanus (NA) and human whipworm – Trichuris Trichiura (TTO), are organisms with which we have formed a mutualistic bond during millions of years of coevolution. Until relatively recently hookworms were found in many parts of the world but, due to modern sewage systems and eradication projects, are now primarily limited to developing countries. It is estimated that 576-740 million people across the globe are infected with hookworms. 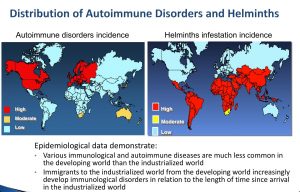 “Over the last 40 years, there has been a rapid increase in the incidence of some immune-mediated diseases such as inflammatory bowel diseases (IBD)(e.g., Crohn’s disease and ulcerative colitis), asthma, multiple sclerosis and autoimmune (type I) diabetes in industrialized, highly developed countries. However, these diseases are not as common in less developed countries. The rapid increase in these diseases cannot be explained solely by genetic and/or environmental factors. Interestingly, epidemiology studies indicate that the geographical distribution of these diseases is negatively correlated with helminth-endemic areas.”

Parasitic Helminths: A Useful Resource for Inflammatory and Autoimmune Disease by Guofeng Cheng and Jiaojiao Lin